Our Use of Mimi & Eunice

In various places, Snowdrift.coop uses the characters “Mimi & Eunice” which we adapted from art by Nina Paley.1 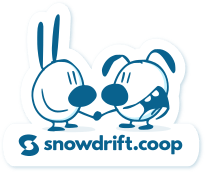 Paley published the original comics from 2010 to 2012 while also serving as Artist-in-Residence at QuestionCopyright.org (a partner of ours) where she produced free culture works such as their “Minute Meme” videos and the booklet, Mimi & Eunice’s Intellectual Pooperty.

We initially used select comics to illustrate our early writings. Later, we adapted the characters ourselves to illustrate the snowdrift dilemma and more.