The name Snowdrift.coop comes from a premise in game theory. The Snowdrift Dilemma (or Snowdrift Game) focuses on freeriding and public goods.

In this article, we’ll first describe the simplest version of the game. Then, we’ll explore the impacts of adding players and running multiple rounds. At the end, we’ll discuss which real-world scenarios map well to this model.

For a fun and superb overview of game theory, check out the interactive web game/explainer by Nicky Case:

The Evolution of Trust

All of Nicky Case’s work happens to be fully FLO (Free/Libre/Open); so someone could potentially make an adaptation specifically for the Snowdrift Dilemma. As is, it serves as a great foundation for understanding game theory in general, and that background will help while reading the rest of this article. That said, prior understanding of game theory is not necessary to read on.

Of course, while game scenarios can highlight important dynamics in decision making, they can’t capture all the nuances of real-world situations or real people. The map is not the territory. With that in mind, let’s check out the snowdrift game:

A snowdrift blocks the road. Will you help clear it? 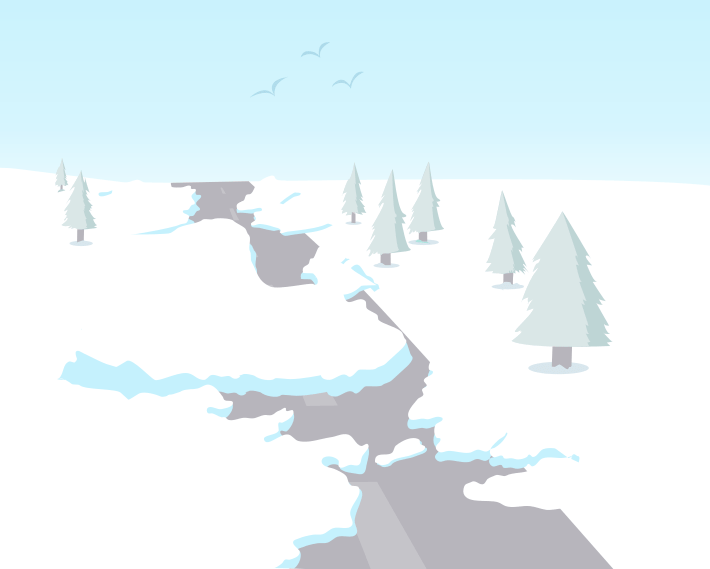 In reality, roads can be cleared more or less, some people enjoy shoveling, people have different levels of desire to get through quickly, and there are all sorts of cultural, social, emotional, and communication contexts to consider. But for the game, we set some artificial assumptions: The shoveling is done or not. The players both want to get through. They would prefer not to shovel. So, some simple game rules could be:

What if the players do not have to decide at the same time? Instead, after one player decides, the other can see the choice and respond? In that case, whoever goes first can choose to freeride, and the other player will be forced to shovel (again, we’re assuming simple focus on maximizing points in the game).1

What if players are allowed to change their mind, to take back their decision in response to what the other player does? Now, the dynamics get complex. As both players try to freeride, they might worry about getting stuck, but they also know that if they shovel, the other will freeride. Given some deadline for sticking to a decision, it becomes a game of chicken. The worst case happens if both players refuse to budge, but both hope that the other player blinks first, before the very last second.

Some game scenarios are like the famous Prisoner’s Dilemma where each player’s best choice does not depend on what the other decides.2 Those cases can be intractable because nothing you do (within the strict confines of the game) can influence the other player. By contrast, the Snowdrift game is less certain and predictable; it can lead to cooperation or it can fail, depending on the players’ risk tolerance.

Of course, in a real snow-shoveling scenario, there’s no simple decision point. At any moment, either people are shoveling or are not. Someone not shoveling might have decided to freeride or might be waiting to decide or might be unable to shovel for some reason. Someone shoveling might be willing to keep going and finish it all or they might change their mind if the other doesn’t start helping. Even within one situation, the real-world scenario plays out over time. What if we add that time element to the game?

What happens if we run an ongoing series of games with the same players? The dynamics change when games are iterative (meaning one after another, each round informed by knowledge of the past round). Unlike the one-off version, iteration provides a basis for building trust. Players can decide each round with a goal of signalling trustworthiness in order to improve outcomes later.

In iterative games, most optimal strategies start with cooperation by default. But if the other player freerides, then we can refuse to shovel for one or two rounds to signal that freeriding won’t pay off as well as cooperating. With this scenario, players can end up in a virtuous pattern of reliable cooperation.

Of course, in any one game where everyone tries to freeride, the outcome is bad for all. If either player is unwilling to accept a short-term cost for the sake of long-term cooperation, they will switch to shoveling even if the other player freerides. That scenario can lead to an ongoing pattern with one player freeriding and the other doing all work, round after round. In practice, the shoveling will go slowly, and the lone shoveler is liable to get resentful and eventually burn-out.

What happens if we have more than two players? We could work out some scoring system to account for the number of shovelers. The more who chip in, the lower the cost to each player. Group dynamics quickly get complex.

The more players, the greater the chance that at least someone will be extra cautious about getting stuck or be more desperate to get through (or happens to enjoy shoveling). That increases the chances for others to get away with freeriding. The more freeriders there are, the more that seems the social norm and it exacerbates the chance that nobody steps up to shovel. Ironically, even though more-hands make lighter-work for everyone, more and more freeriders can make a situation seem especially hopeless.3

Which public-goods scenarios fit this model?

The snowdrift game is specific to public goods. With public goods, an infinite number of people can freeride as long as the core development and maintenance still gets done somehow. The issue is: who will do or support that necessary core work?

Freeriding itself is not necessarily a problem. Some public goods cases face no dilemma. Some projects require almost no work anyway. In other cases, there are enough people who love to do the work and have the skills, time, and energy. For those cases, freeriding is perfectly fine. There is such a thing as a free lunch!

Freeriding is a problem only when it conflicts with projects getting necessary support. In many cases of public goods, the work required is far from trivial. They need either a lot of volunteers or a lot of funds to pay workers to dedicate their time to the project.

Most public goods situations aren’t all-or-nothing. The road could be partially cleared, just enough to struggle through slowly. Whether anyone will bother to use a partly-cleared road depends on their options. How clear must a road be for a particular person to tolerate it? If it’s not already clear enough, can a person afford to help clear it just enough without committing to shovel all the snow by themselves?

Do players have other alternatives? We could add new options to the game. Players could choose to take a detour. Perhaps another road is already fully-cleared and they can take that route instead. Maybe the alternate route is a toll-road and/or has billboards with ads, and that’s what funds that road’s maintenance. 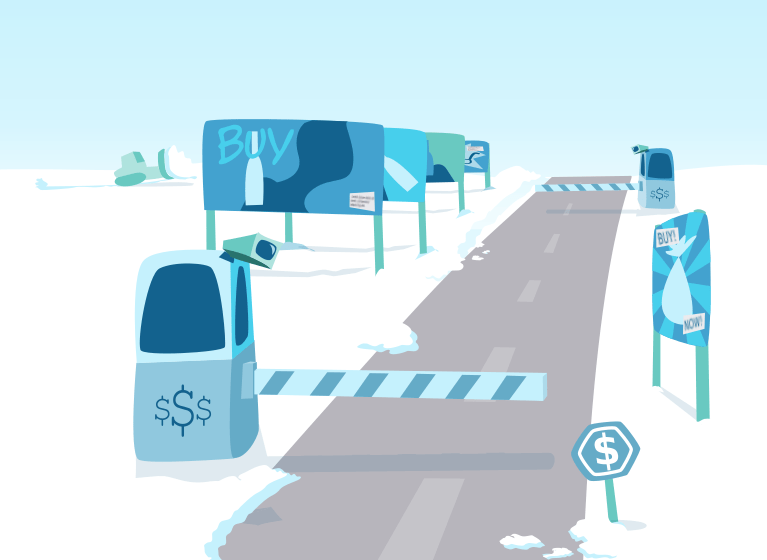 Any one player then could choose to pay the fees and/or accept the annoyance of the billboards. The existence of the alternate route can undermine the players’ motivation to resolve the dilemmas around cooperating to clear the otherwise-unspoiled public road.

The more variables and dynamics we consider, the more complex the model we need to represent the situation. The freeriding and cooperation challenges may be greater or lesser in different cases. Some public goods projects have no troubles, some get by but struggle to reach their potential, and some cannot function at all unless the dilemmas get resolved.

If each of us simply would always contribute to the best of our abilities up to the degree that the projects can effectively use, then we would have a dramatically different world. Most advertising would disappear. Paywalls would not exist. Projects would prioritize their design toward whatever was most in the public interest.

How do we get closer to that vision? How can we reduce the problems of freeriding without harming the project with paywalls, ads, or other restrictions or compromises?

We do have one method that reliably funds public goods: taxation. By simply requiring that the general public fund the road maintenance, we entirely remove the question of whether to freeride. Everyone is ostensibly chipping in whether they use the particular public good or not. Taxation doesn’t eliminate all problems, but it moves them into the space of tax policy and all the debates around that subject. We’re not going to get into that topic here, and we aren’t proposing anything related to taxes.

Short of taxation, keeping the decision to contribute as purely voluntary, what set up will get us the most support for public goods?

A game design that succeeds here will minimize individual costs and risks while maximizing the benefits of contributing.

One of the simplest ways to assure cooperation is to make cooperation conditional. I’ll shovel as long as you are shoveling too. That resolves the dilemma for the two-player snowdrift game. What about multiplayer conditional commitments?

Platforms like Kickstarter address the coordination problem by setting a preset fundraising goal. Nobody donates unless the crowd as a whole reaches the threshold. This assurance is a major factor in the success of crowdfunding overall. However, there are several problems with threshold campaigns, mostly tied to the all-or-nothing approach and how to set the “right” threshold.

At Snowdrift.coop, we are pioneering a flexible mutual-assurance contract. Instead of all-or-nothing, patrons pledge to contribute more as the rest of the crowd chips in more. We call this crowdmatching. Its design recognizes the reality that most projects are not all-or-nothing in their progress. Most projects can deliver some results; it is merely a question of better-or-worse. The snow clearing can be faster or slower and more or less complete.

Of course, our approach of “I’ll chip in more as the rest of the crowd also puts in more” only applies as long as projects still needs more support — those situations where we’re still struggling to clear the road fully and/or efficiently. For a project that succeeds at getting all the support it can use, the game can switch to a spread-the-burden method where additional helpers lighten the load for those already shoveling.

As explained above, iterative games allow players to build trust. In the case of donors who fund workers, contributing slowly over time is also essential to the trust in the project. If the workers are paid entirely up-front, they may or may not deliver quality results. By funding projects month-to-month, patrons can judge over time whether the workers seem to put the funding to good use and deliver appropriate results.4 Patrons can then adjust or remove their support as they wish.

Social psychology and other influences

Real people are unlike the rational self-interested models of classical economics. We have complex social motivations like honor, altruism, guilt, and revenge. All the ideas, presentations, and context around a game will influence how real people behave.

Depending on their attitude, a shoveler might get more upset about others freeriding the larger the number of freeriders — even though that has no impact on the amount of shoveling to do. The mere idea of being taken advantage of can lead to burn-out and frustration independently from the burden of the work itself.

This discussion of game theory is just one part of the context around funding public goods, and this article is part of the broader About Snowdrift.coop collection of articles. Beyond addressing the game dynamics in the design of our basic fundraising mechanism, we need to address social psychological factors in order to inspire a resilient community of public goods supporters who care about the world we are building together.